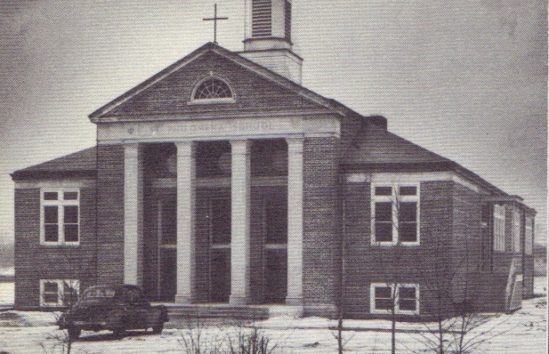 St. Philomena Roman Catholic Congregation is part of the Catholic Diocese of Peoria, established in 1875. Our current bishop is Most Rev. Daniel R. Jenky, CSC. Our very first bishop was Right Rev. John Lancaster Spalding, who was consecrated in 1877. The Diocese serves 250,000 Catholics within 26 counties in Central Illinois.
In 1941, Bishop Joseph Schlarman announced that a new parish would be formed in the then northwest section of Peoria and it would be named St. Philomena. This choice restored the name of the first church in Peoria begun in 1846 during the days of the French missionaries. Ground was broken in March 1944 on the first campus building, which is the current main school entrance building.  The new school opened on January 3, 1946 with 192 children; 165 in grades 1-8 and 27 in kindergarten.

What is now the school learning center was used as the original church and the school was operated in the upstairs classrooms. The parish grew quickly and by 1948 the school needed its first addition with another on its heels in 1950. Registration for 1950-51 was 433. By September 1854, St. Philomena was the largest grade school in the city with an enrollment of 720.

The Mothers’ Club hot lunch program began in October 1946. Mothers would take turns serving our students a hot meal in the dining room throughout the school year. By 1953, approximately 300 lunches were served daily with all food preparation and cooking handled by the Mothers’ Club.

Eventually we would add the gymnasium and primary wing in three sections. What was once the bus garage became a meeting room/school music room and eventually was modified to become our pre-kindergarten room. 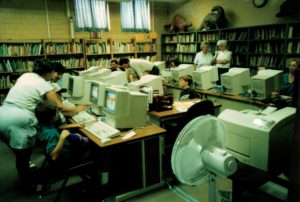 In 1994-95 a Technology Task Force was formed to investigate the offerings of educational computer technology. It was decided that six computers would be placed in each of the math classrooms. A lab of 15 computers would provide additional resources. These were up and running for the start of school in August 1995.

Over the years, the library/computer lab/learning center has gone through many
transformations, always adapting to the changing role of education. In the winter of 2017-18, this area of our school – which was originally used as our church – made yet another jump to expand and become a STEM (Science Technology Engineering Math) learning center for our students.

Sisters of St. Francis of the Immaculate Conception

From 1945-2012 the Sisters of St. Francis of the Immaculate Conception (affectionately known as Heading Avenue Franciscans) served the families of St. Philomena Parish.  The sisters served the parish as school principals, school counselors, classroom teachers, Directors of Religious Education, religious education teachers, homebound ministers, and members on various parish committees and renewal groups. Sister Mary Kathleen Adams
was the first principal of St. Philomena School when we opened our doors to 274 students in January 1946. With school registration soaring, the parish renovated and added on to the parish convent in six months time in 1952 allowing even more sisters to come and work at St. Philomena Parish. The last sister to serve our parish was Sister Jeanne Ciuffini, who was school counselor. Sister Jeanne was called back to the Motherhouse at the completion of the 2012 school year, thus ending 67 years of service to the people of St. Philomena Parish.