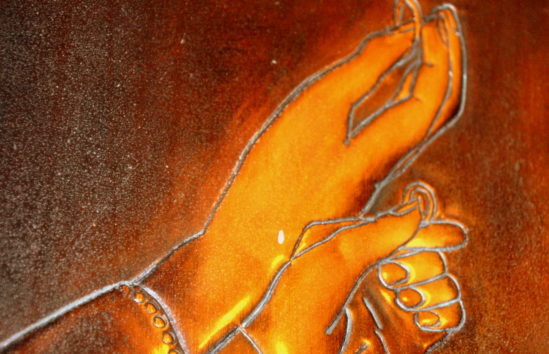 Philomena – which means “daughter of light” – was a Greek princess who lived on the Island of Corfu during the fourth century.  When Philomena was about 13 years old, her parents (who were of Greek royalty) were called to Rome because the Emperor Diocletian wanted to inflict war on the Island.  Having seen Philomena’s beauty and having been impressed with her manners, Diocletian asked for her hand in marriage as a sort of peace treaty.  Her parents accepted the offer, but because Philomena had vowed her virginity to God, she refused the marriage proposal.

In an attempt to get Philomena to marry the Emperor, her parents brought her to Diocletian, who tried to win her favor.  But, she still refused his hand in marriage.  As a result, Diocletian put her in jail and ordered her to be executed. While in jail, she had a vision of the Virgin Mary, who warned her about her fate, but promised heavenly glory and protection when she endured tortures.

From that point on, there is very little documented about Philomena’s life.  What is known about her has been passed down through the centuries by word of mouth.  Apparently, after nearly 40 days in prison, Philomena was tied to a post, flogged, and left to die in her jail cell.  But angels appeared from heaven and healed her wounds with a miraculous balm.  So, the Emperor then ordered to have her drowned with an anchor tied to her neck.  That attempt to kill her was also unsuccessful – angels returned her back to dry land completely unharmed.  Later, she was ordered to be killed by archers.  But, as she was shot, the arrows returned upon the bowmen and killed them instead.  Accused of witchcraft, Philomena was finally decapitated and died in Rome, Italy on August 10.

On May 24, 1802, the remains of a teenage girl was discovered in the Catacombs of Saint Priscilla at the Via Salaria in Rome.  An inscription containing the Latin words “pax tecum filumena” (transcribed as “peace be with you, Philomena”) was on the tomb.  Also cut on the tomb were emblems of a lily and palm (to indicate virginity and martyrdom); an anchor; scourge; and three arrows pointing in opposite directions (one with a curved line, signifying fire).  Combined with the inscription, these symbols were thought to have symbolized the life of Philomena and the different tortures she endured in testimony of her faith and love of Jesus Christ.

Her feast day is August 11. She is the patron saint of children, youth, babies, infants, lost causes, sterility, and virgins. 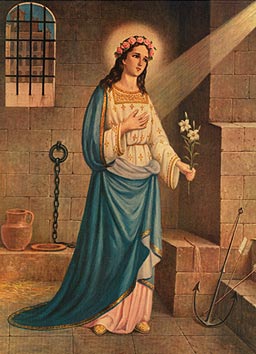 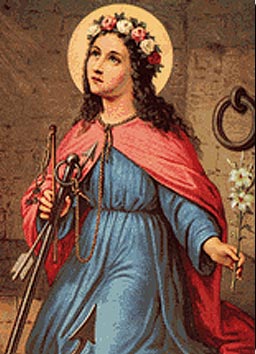 Our parish family prays the following prayer as a Novena to St. Philomena annually from August 3-11, ending on her feast day.  Feel free to pray along with us during these days or at any time.

O faithful virgin and glorious martyr, St. Philomena, who works many miracles on behalf of the faithful. You know the many and diverse needs of our parish family.  I entreat your charity to graciously hear me and obtain from God the need which I now humbly lay before you.  (Pause)  I am firmly convinced that through your intercession, united to the merits of the passion, death, and resurrection of Jesus, I shall obtain what I ask of you, and in the joy of my heart I will bless God, who is glorified in His Saints. Amen.

St. Philomena, pray for us! 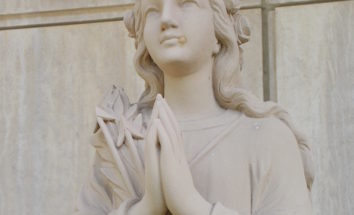 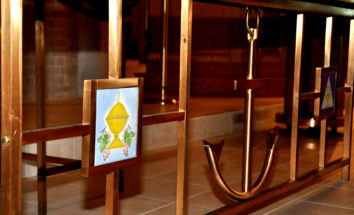