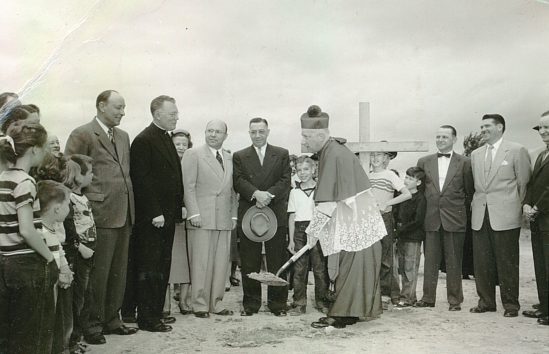 St. Philomena Roman Catholic Congregation exists within the Catholic Diocese of Peoria, established in 1875.  Our current bishop is Most Rev. Daniel R. Jenky, CSC.  Our very first bishop was Right Rev. John Lancaster Spalding, who was consecrated in 1877.  The Diocese serves 250,000 Catholics within 26 counties in Central Illinois.

In 1941, Bishop Joseph Schlarman announced that a new parish would be formed in the then northwest section of Peoria and it would be named St. Philomena.  This choice restored the name of the first church in Peoria begun in 1846 during the days of the French missionaries.  Ground was broken in March 1944 on the first campus building, which is the current main school entrance building.  The first Mass was offered by Msgr. TJ Jordan on January 3, 1946 in the sacristy.  That April, it was announced that Rev. Joseph Gerber would became the first resident Pastor.

What is now the school learning center, in the current school basement, was used as the original church and the school was operated in the upstairs classrooms.  The parish grew quickly and by 1948 the school needed its first addition with another on its heals in 1950.  Eventually we would add the gymnasium and primary wing in three sections.  What was once the bus garage became a meeting room/school music room and eventually was modified to become our pre-kindergarten classroom.  On the east end of that area a Grotto was established, in 2010 that space became a Perpetual Eucharistic Adoration Chapel.

Ground was broken for the current church building on May 12, 1953 by Bishop William Cousins. A pledge drive was held and completed in June 1953 with pledges totaling $360,000. The cornerstone was laid on October 18, 1953 by Bishop Cousins and a dedication was held on October 31, 1954.

Our campus footprint continues to grow with the purchase of homes at 3202, 3206 & 3210 North Emery, which are across the street from the former convent, now referred to as the St. John Vianney Center.  In March 2016, we started construction on our new state of the art Parish Center to further expand our ministries.  The Parish Center was opened in May 2017 and includes the parish office, banquet room, St. John Paul II Parish Library, and athletic space and Catechesis of the Good Shepherd Atriums, both in the parish center lower level.  Our growing parish fills every inch of our available space and we continue to develop new ministries to offer a home to our parish family.

Sisters of St. Francis of the Immaculate Conception

From 1945-2012 the Sisters of St. Francis of the Immaculate Conception (affectionately known as Heading Avenue Franciscans) served the families of St. Philomena Parish.  The sisters served the parish as school principals, school counselors, classroom teachers, Directors of Religious Education, religious education teachers, home bound ministers, and members on various parish committees and renewal groups.  Sister Mary Kathleen Adams was the first principal of St. Philomena School when we opened our doors to 274 students in January 1946.  With school registration soaring, the parish renovated and added on to the parish convent in six months time in 1952 allowing even more sisters to come and work at St. Philomena Parish.  The last sister to serve our parish was Sister Jeanne Ciuffini, who was school counselor.  Sister Jeanne was called back to the Motherhouse at the completion of the 2012 school year, thus ending 67 years of service to the people of St. Philomena Parish.